skip to main | skip to sidebar

Here are some of the fun things we did over Christmas break, but of course for some of the funnest times the camera was in the glove box, Jami's purse or sitting on the bar at home. We were too busy playing to stop and stage a photo shoot!

We got to go to a Christmas Sing at the kids school. It was a blast, but the recession has fully kicked in, rather than having Santa come, they had to make due with Mrs. Claus? Really? It was very fun and a great start to the kids break, the whole school crammed into the lunchroom and each grade had allot of fun singing to each other and their parents.

Here is Ysabel's Kindergarten class, dressed in their PJ's for a trip on the Polar Express singing "Up on the rooftop"
It was VERY cute and she did great, they even had choreography! 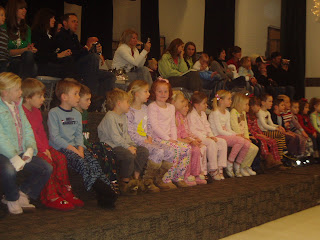 Tagg's 2nd grade class put on quite the show, for the school wide sing his class sang "Must be Santa" they even had props. Tagg's was a "beard that's white" we missed getting a picture, Tagg sang like only Tagg can sing, next time you see him, have him sing it for you!

Then, we got to go back to his class room and his class put on a private concert for their parents. They have been learning some German words and sang "Silent Night" to us in German. That is a tongue twister for a 7 & 8 yr old, they did great! Next they broke out their recorders and played a rousing song of "Jingle Bells" AWESOME!

Tagg told us the night before that he had to wear some fancy clothes to his performance and wanted to wear a shirt and tie. We have gone this route before with him so we kinda had our doubts. Jami finally talked him into a SNAZZY new Christmas sweater and he was in heaven! (Mom's late night run to Old Navy made for a happy boy in the morning!)

This picture is extra special, this is Tagg's teacher Miss Brock, he has a wee bit of a crush on her, once I had taken the picture, Tagg turned bright red, but when he got home he wanted me to download it so he could see it and then show it to CJ and Yzzy! He's hot for teacher! 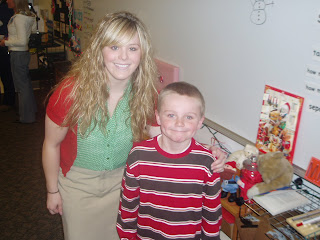 Cole's class was at the opposite end of the lunchroom from where the parents were sequestered, so the picture we got was a blurry mass of Christmas sweaters and Santa hats. His class sang Felice Navidad, and if you have never heard a Watts sing Felice Navidad, Jose and Maria got nothin on us!

Christmas Eve we started a new tradition and went to visit Grandma and my sister Lisa, the kids made her their own Luminary's. It was an amazing experience. We love you Mom! 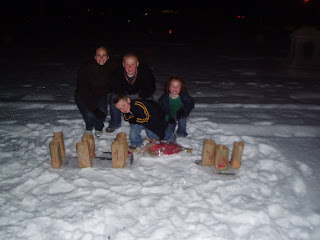 This is what it looked like with the candles lit. This is an old Scandinavian tradition that we read about and have decided to make a part of our Christmas celebration, it was amazing to see how many other people had done the same, it was a very peaceful and beautiful way to spend Christmas Eve. 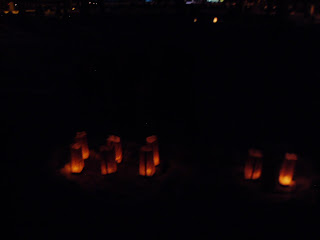 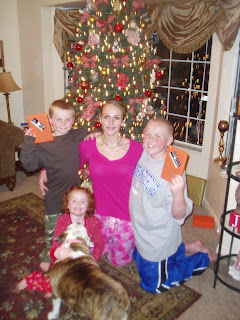 Here are the kids Christmas morning, with sleep swollen faces and big smiles excited to open all the presents Santa brought to them! 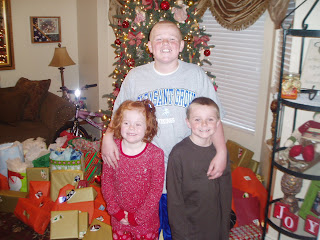 Some of the other fun things we did but missed taking pictures of; spending time with Grandparents, Uncles, Aunts and Cousins on both the Phillips and Watts sides of the families, swimming, movies, playing with toys, a family nativity, New Years in Saint George, 1st night with the Jetts, CJ dancing on the stage in front of thousands of people, then getting escorted off by the Mayor and Sheriff, playing Wii with Grandpa Jack, lots of eating, saying good bye to a special dog,

It was time well spent with lots of family, love and blessings. It's been one heck of and a very interesting year. We are so glad 2010 is here. We were REALLY glad to say:

This was C.J.'s first year of football and he made the most of it. Needless to say the coaches were thrilled when he joined the team! Cole started both ways, offensive tackle and as a defensive tackle with a brief stint at linebacker.
He is #52 on the field and #1 in your hearts, gotta love the kid!
Which one of these is not like the other?
(anybody notice a size difference?) 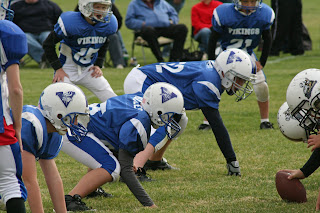 Here is one of Coley plowing the field with an AF's running backs face mask the kid came up with sod in his teeth! 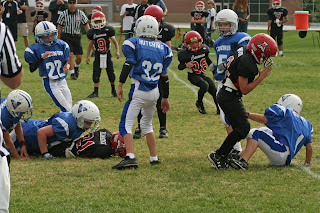 Who wouln't want this kid lead blocking for them?
(this is one of my favorite pics, look at his eye's!!) 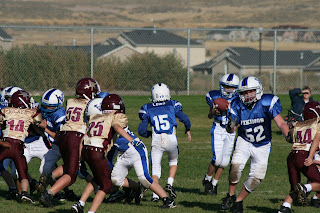 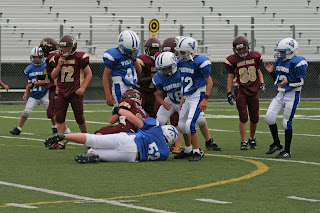 Overall he had a great season, not quite as many wins as he would have liked but he learned alot, got in great shape, was picked as team captain 7 out of 8 games (the one game he was asked but told the coach he wanted to let one his friends take a turn), he made some new buddies, got some bruises, wore out a pair of cleats and can't wait till next year, sounds like a succesfull season! 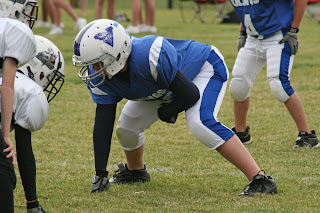 Now (to Jami's delight) he has started basketball (we did take the weekend off), he will be playing on 3 different teams!
Tagg will be starting Jr. Flash basketball in Jan.
Gotta love having boys!

We got to go kite flying as a family with Uncle Dale and Aunty Angry this weekend. We had a blast even though the wind was not always cooperative. This was Yzzy's 1st time flying kites and after she was worn out she finally figured out which way to run when the wind blows, circles only work 1/2 the time?
Thanks Angie for the great pics and thanks to Uncle Dale for helping with all the knots!
(See below for the slide show!)
Posted by The Watts at 7:36 AM 2 comments: 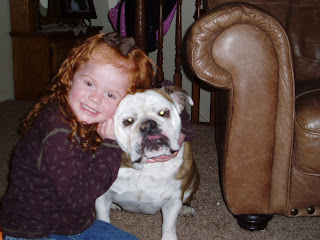 Ysabel is turning 5 this April and is going to start Kindergarten this fall. Starting school means one thing SHOTS!
Both boys have been trying to scare the heck out of her by talking about needles and how bad it hurts, big jerks!
She was a champ, she didn't have any hesitation and said "you gotta do, what ya gotta do" she is very excited to start school and is ready to lay down in front of the school bus in order to get to go to big school with her big brothers. She was so strong and didn't cry till after the nurse left the room, and then it was just a couple small tears. She was very brave.
She is out back playing catch with Taggert and has told him she "cant run fast, only medium, cause my legs are hurty"

Here she is getting a big wet feel better kiss from her best friend! 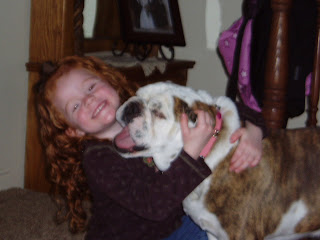 March 1st Coleyboy had his 10th birthday party, it landed on a Sunday so we had to do part of it on Saturday and finish with a family party on Sunday. The celebrations started on Thursday, Cole, Yzzy and I went to the Cougar's home opener baseball game, BYU won 8-3 over the Portland Pilots. It was a record game for the Watts family, we got 3 foul balls. Needless to say the kids were excited for the next game! Friday Cole and I along with his friend Casey went to a BYU baseball game, because of school we were only able to make it to the last 4 innings but we had allot of fun spitting sunflower seeds and watching baseball.
Saturday morning, Cole's basketball team played their last Jr. Jazz game of the year, he played his friend Casey's team and had a pretty good game, he had a huge cheering section, thanks to Grandma Starla and Grandpa Jim for coming out, they help to make it allot more fun and with Jami there as well allot more LOUD!
After the game we went as a family to another BYU baseball game (Cole's 3rd in a row, ya think this kid likes baseball?) the weather was perfect, sunshine and the Cougars won 10-3, even Yzzy was into it for a little while. After the game Cole went to the BYU vs Utah basketball game with Casey's family, he used his B-day money from Aunt Ashlee and Uncle Jake and their boys for his ticket (thanks Merbacks, figured you would approve of how the money was spent!) and loved it! BYU played one of their best games yet and Cole was in heaven!

Sunday Coley got his breakfast of choice, played some video games and opened his presents from us.
That night Aunt Chelsea, Jack and AJ, Grandpa Jim, Grandma Starla and Uncle Tanner all came over to have cake and rootbeer floats. Coleyboy got a BYU basketball jersey and to use Grandpa Jims BYU seats for the upcoming Air Force game, he is pumped, thanks Grandma and Grandpa! Aunt Chelsea and her kids gave him money for new batting gloves, pic's will be coming and he promises to hit at least one homerun for the Longhorns! Grandpa Jack sent money as well and Coley cant wait to go shopping, sporting goods store here we come, thanks Dad!

Here Coley is showing off his baseball cakes! 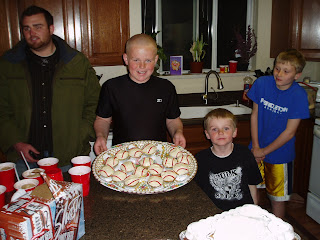 After the cake and floats what could be better than helping it settle with an all cousin trampoline jumping session! 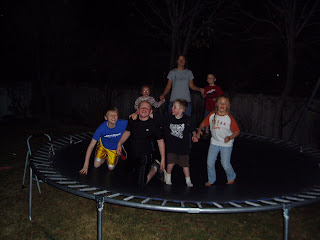 AJ breaking the law of gravity! 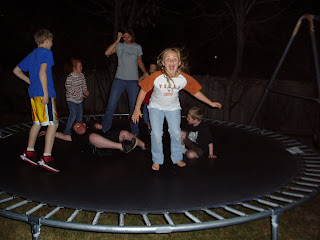 Your supposed to do this after the dismount 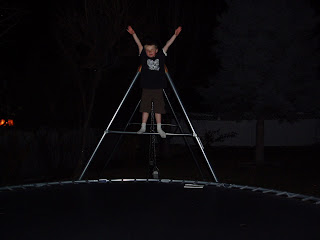 HAPPY BIRTHDAY COLE WE LOVE YOU!
Posted by The Watts at 3:07 PM 1 comment:

After 39 days Jami finally came home!
We are so greatfull to all who have been praying, fasting, watching kids, bringing treats, sending cards, flowers and gifts, visiting, making the trek to SLC and for all of your thoughts and prayers.
She is resting at home, doing some physical therapy, and just enjoying being Mom to our 3 wonderfull kids!
Thank you, thank you, thank you!
Posted by The Watts at 3:03 PM 1 comment:

The Watts
We are a family that loves to have FUN! We love the 4 seasons that living in the TAH allows, but as a family we live for SUMMER! Baseball, swimminng, wakeboarding, tubing and just hanging out at the lake are among our favorite things. Family is our highest value, and our motto is "the family that plays together, is having way more fun"....

'Life should NOT be a journey to the grave with the intention of arriving safely in an attractive and well preserved body, but rather to skid in sideways - a drink in one hand - and chocolate in the other - your body thoroughly used up, totally worn out and screaming 'WOO HOO, What a Ride'

There comes a point in your life when you realize:
Who matters,
Who never did,
Who won't anymore...
And who always will.
So, don't worry about people from your past,
there's a reason why they didn't make it to your future.

Be kinder than necessary
Because everyone you meet is fighting
Some kind of battle.

"This is why I always say, I love you" 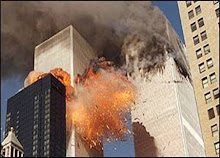